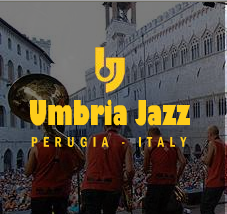 Umbria Jazz is the most important Italian jazz music festival founded in 1973 which takes place annually in Perugia, in July.

The August 23, 1973 was staged the first concert. Music in the natural theater of Villalago Piediluco very close to Terni. The program included the Aktuala, a group long gone (with the benefit of hindsight, it seems their world music) and the orchestra maistream of Thad Jones and Mel Lewis. The first edition included three nights, two in Perugia and Gubbio, but was eliminated by the rain. In Perugia, in the Piazza IV Novembre, made their debut Italian Weather Report, and did much to discuss the performance of free-esoteric Solar Arkestra Sun Ra. It was soon clear that this was a good idea, as testified to the great success, despite a rough promotion. In fact the gestation of the project was fast: from vision to concrete realization passed few months. Umbria Jazz was born in a cafe, now closed, the historic center of Perugia. For some time, Carlo Pagnotta, trader Perugia jazz fan and longtime frequenter of the biggest festivals in Europe, dreamed of a festival in his home. He spoke with two prominent members of the then newly formed Region of Umbria (both would later become presidents) who demonstrated to like the idea and involved their colleague to tourism. It was drawn up an artistic program of mass with the intervention of Alberto Alberti, then the principal manager of the Italian jazz musicians, and the proposal went in the bargain. Was approved.

The cities and squares of Umbria in the days of Umbria Jazz, crowd. In some cases even the musicians have had difficulty in reaching the place where they play.

The year of 1976 saw the stage George Coleman and Art Blakey. In this period in Umbria comes a lot of people and the public, highly politicized, tends to create problems of various kinds: in Italy are so-called “years of lead”.

Even the music was saved: they booed great artists such as Chet Baker, white and middle class. Equally on, of course, was the comparison between the local political forces and in cultural circles. To avoid any risk, the organizers called off the edition of 1977.

After much controversy, in 1978 he returned to reorganize the festival, with a formula that tries in vain to limit the influx of spectators every evening they went on stage two concerts in different cities.

The festival thus became unwieldy. Edition of 1978 no more followed until 1982. It served a pause for reflection.

The event was reborn in 1982 with many changes and regional authorities and tourism promotion did not enter more in management. Is introduced, for the first time, the entrance ticket for the concerts most important. In the early days there was reference to the structure of ARCI, an associative reality at the time very strong in Umbria. In 1985 the Association was born Umbria jazz, non-profit organization, which manages the brand “Umbria Jazz”, owned by the Region, which operates since then the festival in all its aspects (formula, artistic choices, organization, logistics, sponsorships).

Some years later, by the Region, was born the Umbria Jazz Foundation, which has the task of ensuring the financial resources of the public part. The current president of the Foundation is Renzo Arbore, while Carlo Pagnotta (one of the originators of the event) it is artistic director.

The second feature of the “new” UJ is the permanence: no longer a touring festival, but it is held only in Perugia. In truth, in the early years, it feels like the experience of the “decentralization”, with poor results: the festival takes place almost everything in Perugia, with some concerts but held in Terni, Narni, Orvieto, Foligno, Gubbio, Città di Castello and Assisi.

The recovery of the festival was held in a circus tent in the area of Pian di Massiano (near the stadium), well away from the historic center, a kind of confinement because the problems of the seventies had not been forgotten.

Since 2003, the concerts are held at the arena of Santa Giuliana, with names such as Ornette Coleman, Van Morrison, Bobby McFerrin, the Earth, Wind & Fire, James Brown and the Manhattan Transfer. Other concerts are held at the eighteenth-century Teatro del Pavone, the municipal theater Morley, at the thirteenth century church of San Francesco al Prato, Philippine oratory of Santa Cecilia, in the dining Podiani the National Gallery of Umbria, in the cathedral of Perugia (the choirs Gospel), in the Basilica of St. Peter and in the stadium Renato Curi

For the free concerts, using the Piazza IV Novembre and the Carducci gardens.

In the twenty years that part of the 1982 edition adds some digression in the territories of rock and blues and Brazilian song, with greater attention to the Italian jazz.

The artistic choices are divided into two strands: on the one hand the orthodox jazz and other black music (blues, gospel, soul, marching band, rhythm ‘n’ blues) with trespassing in various pop-rock, for a general public . In this context also to be seen performances by people like Elton John, Carlos Santana, James Brown, Donna Summer, Eric Clapton, Earth, Wind & Fire, Simply Red.