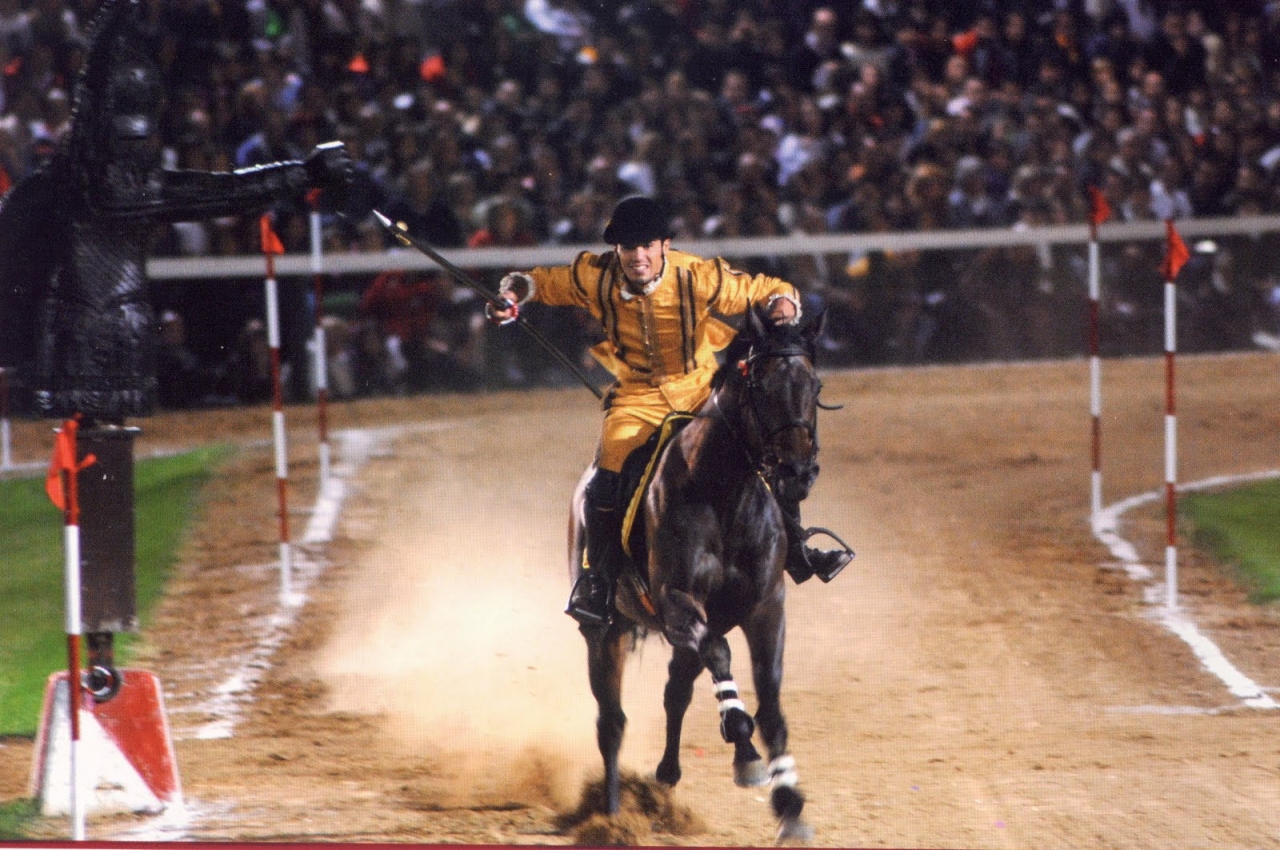 La Giostra della Quintana is a jousting tournament and a costumed historical event that takes place in Foligno. Generally, “the challenge” is held on Saturdays in June, with an edition night, and “revenge” on Sunday afternoon in September with an issue.

The carousel is to do a few laps of the ancient stadium of Foligno (Campo de li games) as quickly as possible, putting three times a ring hanging from a statue (the “Quintana”) and receive no penalty. The ring diameter decreases progressively in the three rounds of the competition (8cm, 6cm, 5cm). The jockeys running in historical costumes and seventeenth-century before the race (the day or the night before) held a parade in lavish historical costumes of the seventeenth century.

The name comes from the name of Quintana fifth way of the Roman camp, which took place in the training of soldiers, armed with spears, threw themselves against a puppet trying to thread the ring hanging from a hand puppet. Then go back to that time the origins of the tournament, but the first documented evidence of the conduct of Quintana as jousting tournament tied to a party, dates back to 1448. Since then, Foligno, Quintana was held every year without interruption until today, with the ‘except for a break of nearly a century until 1946, when it was restored in its present form. In 1613 the Priors inserted the context of celebrating the carnival Quintana, changing the conduct and spirit with the criteria that still exist today. The knights jousting are 10 representatives of as many districts of the city. Galloping on a horse, should stick with a spear a series of rings that gradually get smaller. The rings are hung at the right hand of a statue rotating solid walnut (seventeenth century) that the left holds a shield and depicts the god Mars. This race had, in the past, the role of honorary titles attributed to various riders. The ceremony of the race is surrounded by the historical parade with over 600 figures in rich clothes seventeenth century who, the night before the duel, passing through the streets of Foligno.

La Giostra della Quintana was restored in 1946 to idea of Emilio de Pasquale, originally from Andria and Foligno of adoption as Ettore Thesorieri, organizer of the 1613 edition and author of Stimulus Generoso Vertue that is repeated every year during the opening ceremony Giostra della Quintana with the help of some fellow Foligno, including Luke Barnocchi who edited the look spectacular, buying at their own expense costumes and bringing them from Firenze.Luca Barnocchi was also the first president of the Tournament of the Quintana.