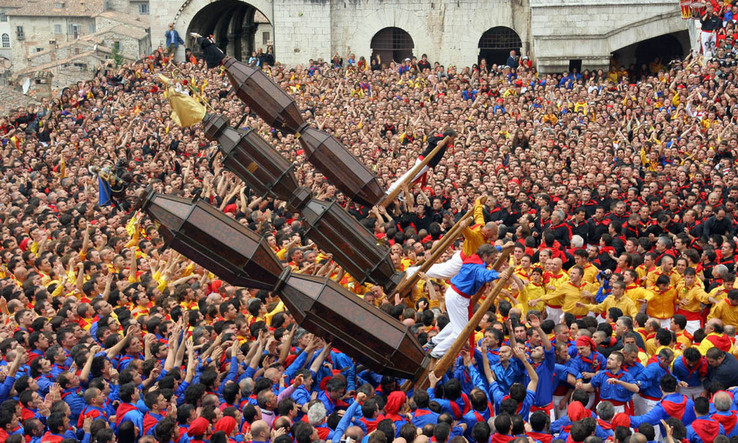 The Festa dei Ceri is held in Gubbio, in the province of Perugia, on May 15 of each year. Tradition has it that it is a Catholic religious festival in honor of Saint Ubaldo Baldassini, bishop and patron saint of Gubbio, who died in 1160, and would be the result of the transformation of an original offer of wax that the medieval guilds eugubine donated to the patron. Hypothesis undocumented assert, however, that he would rise from the pre-Christian pagan rites, perhaps in a ceremony in honor of the goddess Ceres, linked to the awakening of spring.

The candles are three “artifacts” of wood crowned by statues of St. Ubaldo (patron saint of Gubbio), St. George and St. Anthony Abbot, grafted vertically on as many stretchers, in the shape of “H”, which allow the carrying on the shoulder ; their weight is about 300 KG is not only the weight that makes it difficult to transport them (which, in fact, takes place run), as the height, the speed, the roughness of the path, and so-called “mute”, changes “on the fly” between the carriers in the running.

Wearers of Ceri called ceraioli and each has a membership of only cero. This membership is the result of free choice or is linked to family traditions; traditionally, the candle of St. Ubaldo would be related corporations of masons and stonecutters, to that of San Giorgio that of traders, while that of St. Anthony the farmers, landowners, and students.

The uniform “ceraiolo” consists of a pair of white pants in cotton, a shirt of a different color depending on the taper of belonging (yellow for St. Ubaldo, blue for St. George and black for St. Anthony), a red sash tied at the waist mo ‘belt, a red handkerchief resting on the shoulders and pointed ahead. The Capodieci are three, one for each candle: making the lift (or inaugurate the race) and are responsible for the smooth running of the race of their candle.

With the name Capodieci are also called ceraioli that guide the candle during the race, being before, between the shafts, and supervising the change that you give the various “mute” of ceraioli (teams of eight people); then there are capocinque, that from the back of the stretcher help the Capodieci to keep in line the race of the candle and the corner if (they are called anchesterzaroli). The ceraioli carriers are divided into four points, leading the candle at the four ends of the stretcher, and as many strains, placed more internally

Traditionally, ceraioli are chosen among adult males of the families who live in Gubbio; on rare occasions (eg during war), women were admitted to the transport of the Candles.

For those who do not fall into this category, in the following weeks to 15 May, held two more races: that of Ceri Mezzani and Ceri Piccoli, in which the carriers are chosen among adolescents and children, respectively. On these occasions, of course, the candles are replaced by replicas in scale lighter.

The symbol of the three Ceri is also in stylized banner and flag officers of the Region of Umbria.

The Italian Post Office, in 1983, issued a stamp from 300 lire in tribute to Ceri of Gubbio.

It has a prologue to the first Sunday in May, when the candles are brought, in the horizontal position, down in the city from the basilica of St. Ubaldo, which houses all year. On this occasion the candles lead to “straddle” many children.

The festival itself takes place May 15 and has a fixed schedule every year.

Program of the festival:

At 5.30 in the morning a group of drummers through the streets of the city to give the alarm to the Captains and the Capodieci

At 6:00 the bell (the bell of the main Palazzo dei Consoli) sounds the alarm for the whole city.

At 7.00 ceraioli, drummers, Capodieci and captains meet at the cemetery to lay a wreath of flowers and honor the memory of deceased ceraioli.

At 8:30 am, at the church of San Francesco della Pace (called “Masons”), Mass is celebrated. As soon as the mass, a child draws from an urn (called “Bussolo”) the names of the captains who will lead the party two years later.

At 9:30 begins the “parade of saints”, ie the three statues that will crown the candles are carried in procession through the streets of the city, to the Palazzo dei Consoli, where there are already waiting for the candles. After the procession, the ceraioli find themselves in via Baldassini, under the arches of the Palazzo dei Consoli, to consume the traditional breakfast of stockfish ceraiola.

At 10.00 at Castle Gate are distributed of “posies” which ceraioli are pinned on the node tissue that surrounds the neck. From this place comes alive, the procession of all ceraioli that, through the streets of the historic center, will arrive in Piazza Grande.

It takes place at 12.00 in Piazza Grande the so-called “lift” of the candles. The Capodieci (standing above the crowd on the stretcher) are thrown forward to allow the candle a lever that will lift him from the ground, and throw in the crowd ceramic amphora called “jug”. The candles begin their race in honor of St. Ubaldo, making three complete turns on the square (except the last candle to St. Anthony who performs four laps) and then dispersed through the streets of the city, each with its own path. They are then left to be taken for the race which takes place in the afternoon.

At 18.00 o’clock starts the Corsa dei Ceri. The Ceri walk the city streets. After three stops, return to the top of Mount Ingino in the Basilica of St. Ubaldo. In particular, the last leg of the route takes place entirely uphill and is traveled in about nine minutes.

The order of departure and arrival is predetermined and can not be altered during the race: it is always the Cero of St. Ubaldo to come first in the basilica, followed by that of San Giorgio and finally to St. Anthony.