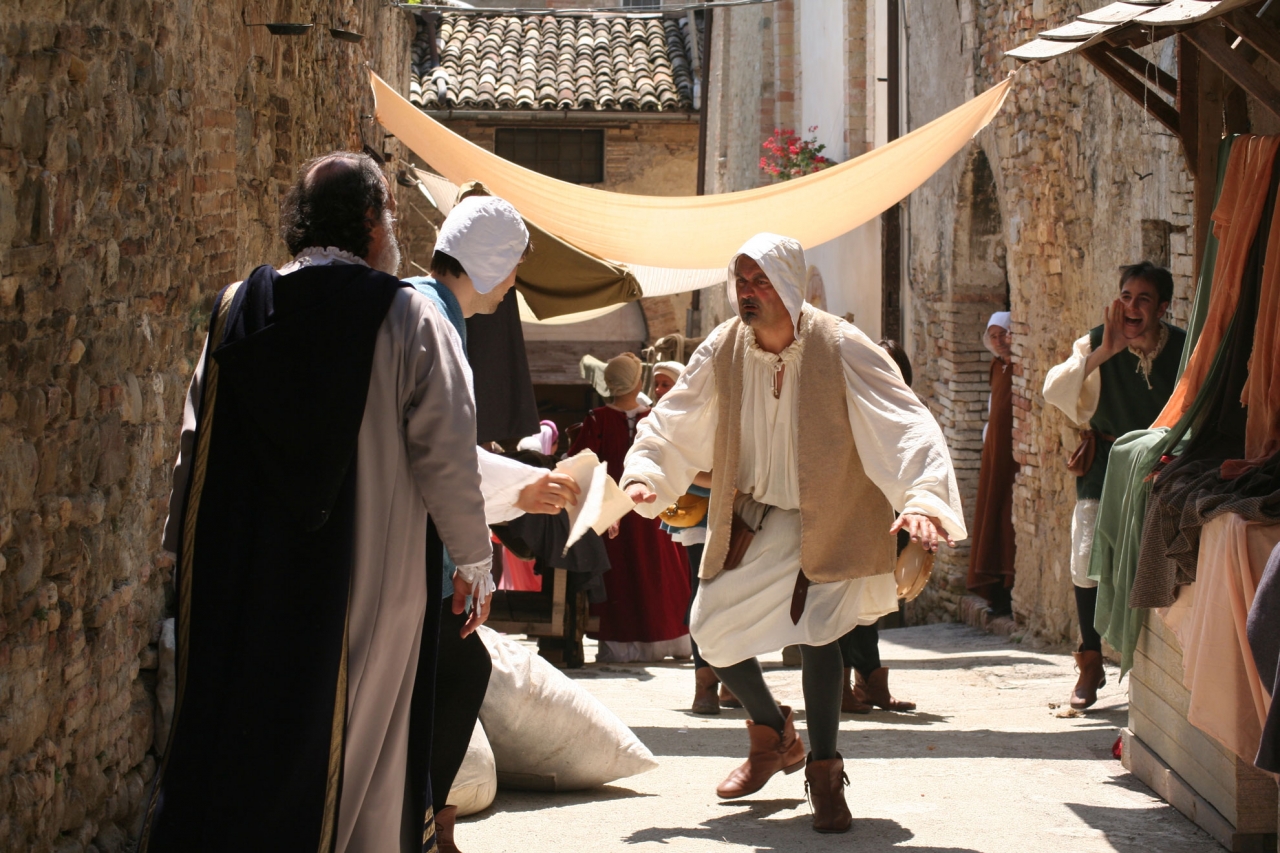 The most important and most well known of the events of Bevagna, the Mercato delle Gaite, takes place in the last ten days of June.

The festival is inspired by the original division of the country into four gaite or neighborhoods which was based on the administration of the city in medieval times. Their name comes from the ancient churches: St. John (the present St. Michael the Archangel) Sancta Maria Filiorum Comitis, San Pietro, which is no news until the fifteenth century, and San Giorgio, now SS. Dominic and James.

The event aims ricistruire with maximum historical reality and richness of detail the daily life of the inhabitants of Bevagna in the period between 1250 and 1350. At the end of June so Bevagna makes a splash in his remote past The ancient medieval crafts shops open again the doors and take over the assets. The streets are crowded with bevanati in period costumes who relive the everyday life of their ancestors eating, working, playing just like them. The Mercato delle Gaite is the triumph of the ancient crafts. The art of Mattonari, processing and production of hemp, the traditional home of Bevagna made frame, pottery making and that of the blacksmith, processing wax, glass and the production of parchment paper, the minting of coins , are valuable opportunities to embark on a fascinating journey into the past and feel, together with all the inhabitants of the village, citizens of ancient Mevania.

The city, totally involved, recovers its traditions, its roots with a valuable historical accuracy that makes the reconstruction of the environment, of the streets, moments of everyday life, craft activities such as processing of the strings, wrought iron and wicker .

Every year, each gaita faithfully recreates environments and situations medieval with careful and precise reconstruction of shops, crafts and markets. Are used the most beautiful sights of the city to give rise to the activities on which it was based economy era. Here then, for example, the paper mill, the mill, the brand, the oven and different types of workshops: the glazier, the potter, the blacksmith, the dyer and many more.

Walking through the streets meet the market stalls that sell goods typical of the period: from fabrics to iron, from candles to groceries more varie.A complete the magnificent picture of the market there are the medieval taverns, one for each gaita, where you can taste the typical dishes of the Umbrian medieval. The traditional animosity Bevagna on again in the races that see opposite the four gaite, in strife and games that are true moments of celebration and gathering.

With a complex points system, awarded by experts in various fields especially called to judge the credibility of historical, the last day of the event it is decreed that the winner receives the prize.

The strong sense of belonging to their gaita makes racing very heated and stimulates continuous improvement of the proposals in the various sectors of gaite with obvious advantage of the overall quality of the event. Of remarkable quality and authenticity is the gastronomy, enriched by medieval recipes, offer during the week in the taverns.